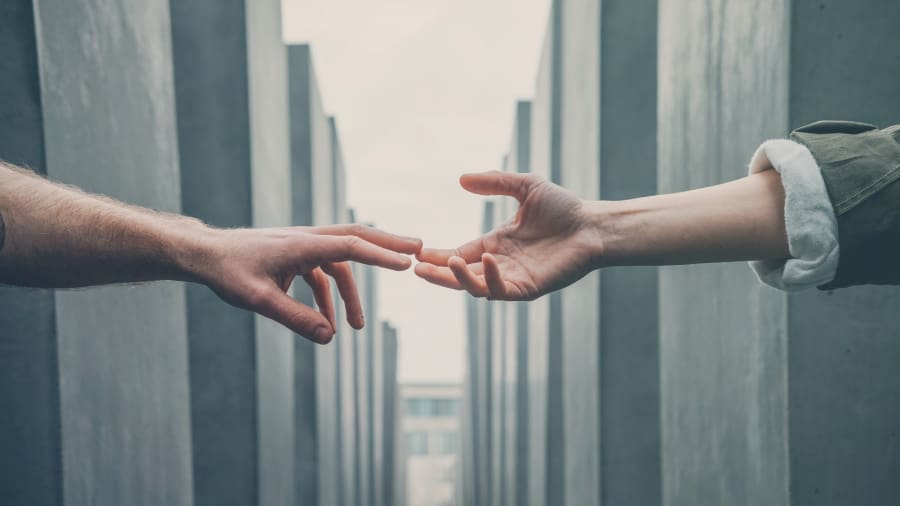 Listening – that’s old news. Show me one or two people who haven’t heard or learned this. It’s a central component of every communication training program. Why that again?
Quite simply – because we don’t do it or do it only very superficially. And deep listening is the mega competence.
For me, for you, for executives.
But what exactly is Deep Listening?

In the communication training courses already mentioned, there is indeed repeated talk of so-called “active listening“. Is this Deep Listening – the mega competence?
Yes, and only partially.

“Active Listening”, a model by Rogers, is often divided into three levels.
“Listening”, i.e. accompanying the conversation partner with non-verbal signals, such as nodding, eye contact, a facing body language and also with small sound signals, such as “mmh”, “ah” and similar.

Then there is “understanding”, or rather cognitive understanding. Here it is a matter of the listener being able to reproduce what has been said, preferably in his own words. And summarizing and mirroring what was said. Or even deepening or questioning what has been said with precise questions.

And the third level is then the “understanding” of the feelings. The perception of what moves the other person at the moment. And the ability to address this and to mirror it to the other person verbally and also through the body. This is already a very elaborate version of “listening”, because here it is necessary on the one hand to grasp emotions and then to be able to express them authentically at the same time. Not to mention the ability to empathize with the other person and perhaps even read between the lines.

Knowledge about how to listen is actually available. It is just that it is often not used.

And this is exactly where Deep Listening – the megacompetence – clearly goes beyond Active Listening. It already begins with the fact that “listening” starts with oneself. And only after that listening to the other is possible at all.

The term Deep Listening has been used by several authors. The model of Deep Listening, which will now be looked at in more detail, comes from Otto Scharmer and is based on his Theory U. It includes four levels and distinguishes between “listening” to oneself and “listening” to the other.

It comprises a total of four levels and thus also differs from the model of Active Listening.
Here it is presented in a slightly modified form.

Level 1: Listening to oneself.

Deep Listening is based on the assumption that only those who are in contact with themselves can really listen. I.e. who is not distracted by his/her own EGO or external circumstances, but is completely present with him/herself. These people listen to themselves several times a day and take care to be in an inner balance. Techniques from the field of mindfulness are helpful for this.

Level 2: Listening to the Other.

When the presence is achieved in this way, this is a good basis for perceiving the outside, the other. Then what is said is received at all in calmness and a certain composure. Then one listens completely. First with the head.
In the contact this becomes immediately noticeable. The speaker thinks that he/she is being heard. He/she is allowed to speak, to take his/her time. The stress of having to be quick, of having to get a word in edgewise, eases for her/him as well.

Level 3: Perceive the other person with all senses.

There is then something more going on. If the “listening” goes beyond taking in the words in presence, then the heart is also used for perception at the same time as the head. Then the feelings and emotions play a role. Then the undertones are “heard” or read by the listener. We use the term “empathy” for this. Empathizing with the person you are talking to. The resonance with the other person.

Science assumes that our ability to feel empathy is created early in our socialization. Here, the model of “mirror neurons” is often cited, which describes an early resonance system of our brain.

If we perceive people not only with their thoughts but also with their feelings, then they will describe to us that a perceptible feeling of well-being arises. They then seek our proximity and get more involved.

At least up to this level, deep listening – the megacompetence should be practiced by managers today.

Level 4: Entering into a generative dialogue with intuition.

And it goes even beyond that, says the Four Levels of Listening model. We can also bring our intuition into play. Then we also “listen” with “sensing”. Then we let images and associations arise from what the other person says and what we “feel” in the process, and offer them in dialogue. As a rule, this sets a creative process in motion and a generative dialogue develops. An exchange in which something “beyond” is created. One or more impulses that take what was originally said a bit further, modify and transform it. Not forcefully from the outside, but from within.

This is then usually described by all participants as extraordinarily enriching and where possible meaning-giving. They then speak of a feeling of connectedness. Then Deep Listening – the megacompetence becomes a gift for both sides. For the one who is being listened to and for the one who is listening.

And this last mentioned competence of integrating intuition and generative dialog is truly a Future Communication Skill that is actually a “must have” for managers of the future.

In a world where we are overwhelmed with information and hardly know where our heads are anymore – how are we supposed to understand each other. If not via the path of truly deep listening.

Admittedly, this has to be learned. And it takes a little time, because it needs to be practiced. But it is also rewarding in every way.
The best way to do this is to start over and go through all the levels of deep listening.
By the way, effective designs to follow this path are available at yoU for business.

And also we at TCJG offer a nugget with the same name “Future Communication Skills“.
You can reach us at TCJG to go.

Deep Listening – the mega competence.
It works well with us.